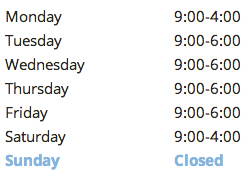 We are committed to the safety of our patients, employees and communities.
Click HERE to find out more about our new safety protocols.